Have you ever seen that movie Marley and Me?

It’s about this couple who adopts this yellow lab puppy.  The puppy is so adorable in all its soft, puppy fur and sweet brown eyes…and it grows up being what the author of the original book (based on a true story) called “the world’s worst dog.”

Turns out I can relate.

We took Charlie into our home when Ryan moved in last October.  Before that Charlie lived with Ryan’s parents, who took him in after he had bounced around a couple other homes.  We decided we would give Charlie his forever home, and were excited to give Cooper (our angel dog) a sibling.  What we knew of him was that he was a little dense, but incredibly sweet, and got along with Cooper great. 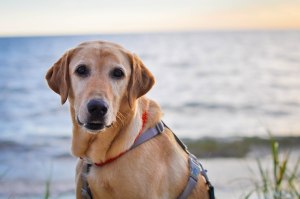 What we have learned about Charlie since is that he insists on barking incessantly at squirrels, innocent passersby, our mailman, any delivery person, falling leaves, any sudden movements made by Ryan or myself, and I swear, should I think too loudly, he will resound his booming bark.  We have learned that we need to precariously monitor his water intake or else he will create small lakes on our floors.  He has intense bowel issues and needs to eat very specific (and expensive) dog food.  This will take away a touch of the smell, but the farts remain.  He is never allowed a bone or a treat or anything other than that food.  Try to give him scraps in my line of sight, I dare you. 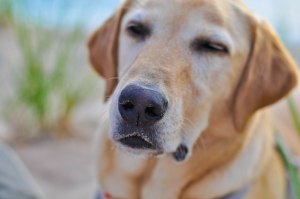 <—I swear this is his farting face

Charlie is a nightmare on walks.  If he sees another dog he will growl so vehemently that he also begins breathing fire like a murderous dragon as he pulls me like a rag doll across the sidewalk.

He also has terrible allergies and licks his paw through the fur to his skin, causing massive sores.

So last night, Ryan and I thought it would be a brilliant idea if we took the dogs to a beautiful off-leash dog beach on Lake Michigan for a relaxing picnic and family time. 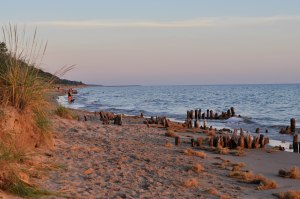 From car to beach there’s a short hike on which they require dogs to be leashed, and before we even approached the beach we passed four dogs, and Charlie maintained his erratic supremacy for each.

As Cooper ran the beach freely with new sweet doggie friends, Charlie remained on the leash, but not without attempting to remove my shoulder from its socket and causing leash burns all over my hands. 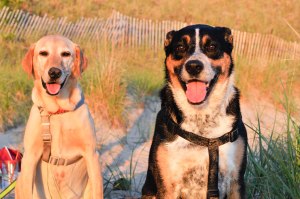 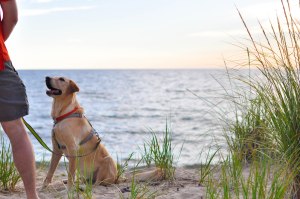 The relaxing evening I had planned was replaced with one of anxiety.  I constantly prayed that he would not latch his jaws around another dog’s neck.  I prayed for no blood.  I growled through my own clenched teeth, “I cannot stand him!”

At one point he freaked so intensely that in my retaliation I allowed my emotions to become physical and I smacked him…hard…several times.  “Feel better?” Ryan asked. 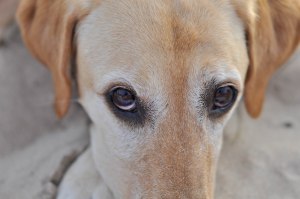 I felt terrible, and guilty, and still so angry.

We went home and went to bed, me wallowing in the sadness of my bad dog ownership.  Until around 3am when I awoke to Charlie peeing in my closet.

The Devil knows how to ruin me.

Ry and I cleaning up a huge puddle of urine at 3am is not a pretty sight.  It was a lot of swearing and partial nudity, followed by apologies and jail time (for Charlie).

Did I mention that Charlie’s original name was, indeed, Marley?  After the “world’s worst dog”?  Fitting.

In all of Charlie’s ridiculousness, in his frustrating antics and infuriating behaviors and habits, I can still say that I love this dog.

I am consistently reminded of God’s grace with our goofy dog, because even when I want to throw in the towel with him, I often think about what would have become of me if God acted in the same way.  What if the One Who Saves would see my behavior time and time again and shake His head and give up on me?  What if He thought I’ll never get through to her, I’m done!  I’m taking her to the pound!

If there was no such thing as grace, I would be totally screwed, because let’s be real, I’ve peed in the good Lord’s closet many times. 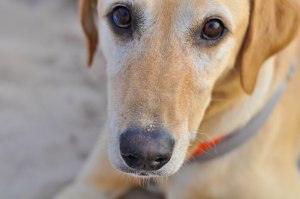 With Charlie, I’m reminded of the importance of forgiveness, not only with him, but with others in life and with myself.  If I’m incapable of moving on past his barking and his farts and his doggie dominance, how will I forgive those who hurt me, dominate me, or use words to bring me down?  How will I be able to see past my own giant flaws and be able to feel the warmth of God’s forgiveness?

I believe we would all be lost without grace…without forgiveness, and I hope Charlie is around for a long time to keep giving me those reminders.

To the cute blonde sunbathing quietly on my back deck, our little Charles Vader,