Remember that time, when I received tickets to the Bob Dylan concert, and then they weren’t real and I felt like a complete fool?  No?

If you would prefer the quick story, I thought a table left me and my coworker/friend two extra tickets to go see Bob Dylan in concert one night back in November.  We got out of work early to make the show, only to find that they were merely parking tickets.  The ticket guy looked at us like we were morons and we both still feel like idiots any time we talk about it.

Would you believe me if I told you that it happened again?

Last night, one of my favorite comedians performed in Grand Rapids.  His name is Brian Reagan.  If you haven’t heard of him…

…there you go, just a taste of his clean funny-ness.

I have been quoting him for over a decade now, and I never tire of his bizarre bits.

But, of course, when he finally makes it to Grand Rapids I would not get tickets to go see him live.  I’m poor, I have to work!

We were busy at work last night, the night of his show.  By busy I mean 15 minutes before opening the doors people were pounding on the glass screaming their desires for filet mignon.

At 8:30 I had a couple sit down with their son.  They informed me they had a show to be at in one hour, I replied, “You’re going to see Brian Reagan, aren’t you?”

Then, the mother came at me with this line,

“There were supposed to be four of us, if you want the extra ticket.  I don’t know if there’s any way you could be out in an hour?”

My heart sank.  There was no way.  The restaurant was full on a Saturday night.

“No, I’m pretty positive I wouldn’t be able to make that happen.”

We carried on with our lives, they with food eating, me with food serving, and then a miracle happened.

Just as this sweet little family was getting ready to pay their bill, one of my other tables left, and the six top (table of six people, if you really couldn’t piece that together) I was waiting on asked for their bill “asap, we have to leave very soon.”

No…I am not shitting you.

I ran to my boss with fingers crossed, and so filled with hope that I wanted to barf it out.  When I told him the story, he replied with, “Yes, absolutely, leave and we will take care of everything.”

No, I’m still not shitting you.

Then I told the family my news, and they clapped their hands with excitement, and then handed me a ticket and refused any money for it.

Then my coworkers cheered me on as I rushed to finish up my last bits of necessary work.

Then I ran across the street and sat in the third row and shot snot out of my nose from laughing so hard.

After the show I chatted with the family for a few minutes and thanked them until they were annoyed.

So, what I’m trying to say is that this really happened, and it was in no way like the Bob Dylan debacle earlier this winter.

Then I had a bit of wine with good friends, followed by a beer with a handsome man.  I am jealous of myself. 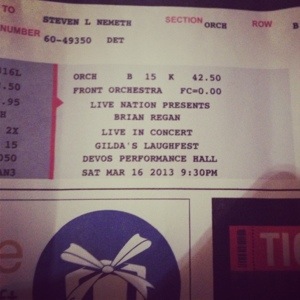 do you believe me yet? 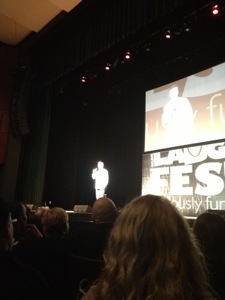 Thank you, Dan, Linda, and Steve, you wonderful, wonderful people.

I didn’t do a shot of Jameson this St. Patrick’s Day, but I did a shot of iced tea to avoid peer pressure…does that count?